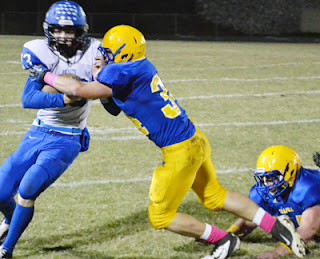 PRINCETON, Ky. – Despite expectations of anything short of a blowout, Crittenden County had its fans amazed and Caldwell County on edge after keeping the game closer than expected for 20 minutes Friday night at Princeton.


The Rockets lined up to kick a 31-yard field goal with just over four minutes left in the half. Had it been good, Caldwell might have taken a 7-3 lead into the break. Instead, Micah's Holloman kick was partially blocked and it hit the crossbar – no good.

On the next play, Caldwell's Jaylen Boyd went 80 yards on a draw to give his team a 14-0 edge. A Rocket fumble set up the Tigers' next score with 2:39 to go in the half as Boyd scored again on a 10-yard run.

From there, Caldwell hit the afterburners and blew away the Rockets 49-0 as Boyd scored three times, rushed for 166 yards and caught four passes for 71 yards. Sophomore quarterback Elijah Sindelar completed 10 of 18 passes for 200 yards, including two touchdowns.

“Our kids played hard,” Rocket coach Al Starnes said. “They played about as hard as they possibly could have.”

Starnes said his boys were trying to run out the clock late in the half and go into the break trailing just 14-0 when a fumble set up the Tigers’ third touchdown.

“I was proud of the kids. I thought we could have gone in the tank after the loss to Ballard, but we didn’t,” Starnes said.

Still, the loss to Caldwell was substantial by game’s end. The 49-point margin was the biggest scoring differential in series history. The Tigers have scored 40 or more points in the last three meetings – something that had not been done three straight times in previous encounters.

Caldwell's victory ensured it a Class 2A First District championship and a guarantee of at least two home playoff games. The Tigers (7-2) finish the district 4-0 and will play Butler County in the first round of the 2A playoffs. 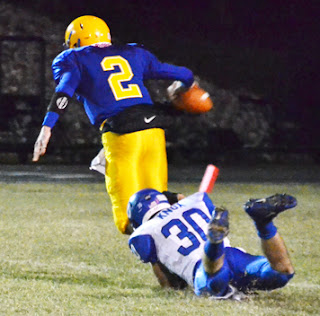 Crittenden has lost four in a row and its offense continues to struggle. It's been decades since the team went this long without a touchdown. The end zone has eluded the Rockets in the last four games and they finished fourth in the district. Crittenden 3-6 overall and 1-3 in district play will go to top-ranked Owensboro Catholic in round one of the postseason.

Crittenden played the game without starting quarterback Travis Gilbert and star lineman Stephon Cozart. Five other starters or regulars also missed all or part of the Caldwell game due to injuries.
Starnes said backup quarterback Noah Dickerson turned in a solid performance during his first start and end Bobby Knox had another stellar game, especially on defense and special teams where he had several long kickoff returns.