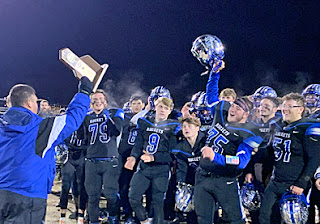 MARION, Ky. – Through the static of a predictable and deserved celebration, Rocket second-year football coach Sean Thompson made sure the message remained clear Friday night.

With a din of post-game party music blaring across the field at Rocket Stadium, his team chanting “Three-peat” as it officially claimed a school-record third-straight Class A First District championship, Thompson dialed down the frequency tighter than normal to make sure his boys were keeping score. The 41-3 basting they had just laid on Russellville in the second round of the playoffs were not necessarily the numbers reflected in his dispatch.

“This is what you worked for! This is Number 1,” he said, checking off the team’s post-season goals. “Goal Number 2 is to get past this next one, so we have to go get it.”

Knowing full well that his 10-2 Rockets are playing arguably their best football of the season, peaking at the right time, Thompson was stoking the hunger – flashing a tastier treat in front of the barking mass of celebrating athletes.

“It’s all about proving it every week. We have to prove it,” the coach reminded them before turning away and letting the post-game carnival continue.

He then ducked out of sight as a throng of fans and family rushed in for the customary post-game photographs and festivities. It was indeed party time. At least for a moment.

Thompson undoubtedly moved away to let the impact of the result sink in. Just two seasons into his coaching career, his record is 21-4 and his team is two wins from a state championship berth. It is at the same place Crittenden finished up a year ago with a loss at Campbellsville in the state quarterfinals.

Ambition laced with loftier goals may seem a bit dubious as the reality of Crittenden County’s next opponent comes into focus. The Rockets will now travel to Louisville to play undefeated Kentucky Country Day – the Bearcats are No. 1 in the KHSAA’s ever-present, new RPI ratings, designed to measure a team’s strength. Not just in Class A is KCD No. 1, but it reigns supreme over all classes, quantified by a complex mathematical formula as having the best power ranking of all 223 teams across the state.


CLASS A PLAYOFF BRACKET
For only a short time can Crittenden County reflect on the utter dismantling of Russellville (4-7) – a team that had taken the Rockets to the final seconds a few short weeks ago before losing 21-14 in their regular-season encounter. This time was oh so different.

Inspired and led by a defense that held the Panthers to just eight rushing yards and 25 passing, Crittenden ran away with the game early, taking a 20-3 halftime lead behind the arm of sophomore quarterback Luke Crider, who became the starter just four weeks ago.

Crider was impeccably efficient, just as he had been in the first playoff game a week earlier. Against Russellville’s secondary, he was 11-for-15 for 126 yards in the first half with two touchdown passes – one to Preston Turley and the other to Caden McCalister. Poised in the relative comfort of a firm pocket established by an improving frontline, Crider was calm as he ran down his checks and found the open receiver time and again in the first two periods. He’s only been tackled with the ball in his hands once in four and half games since taking over at QB.

In the second half, he didn’t need to do anything. In fact, he didn’t. Crider stayed mostly on the sideline while Crittenden used three other players at quarterback or on direct-snap rushing plays. Xander Tabor, who had 39 rushing yards at the half, added 100 more in the final two periods – mostly from a wildcat formation – and scored three times.

“The defense has been the heartbeat of our team,” Thompson said, but he also pointed to an offense that’s maturing and proving its dual capacity.

“Luke Crider was big for us tonight, he’s grown up right before our eyes,” the coach added. “There came a point that he was the one moving the ball down the field and we were depending on his arm based on what Russellville was doing.”

Russellville’s leading rusher Jovari Gamble was injured with three minutes to play in the first half and was taken from the field on a stretcher. He had banged his head on the ground returning a kickoff and fortunately came back to the stadium later in the second half after being cleared at the local hospital, but did not play.

The prognosis for Crittenden County’s chances in round three of the playoffs remains to been seen. The Rockets are ranked 10th in the Class A power rankings, but Thompson likes what he’s seeing as the Rockets approach their 13th game of the season, and he likes their chances.