Rockets give Starnes one last crown 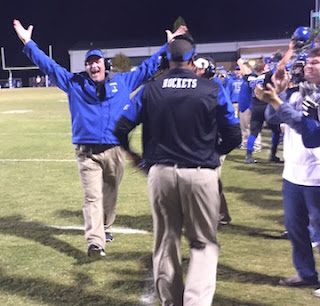 MARION, Ky. - Some moments are just bigger than the game.

In his last chance for a crown, the Rockets gave 27-year head coach Al Starnes something he will cherish for a lifetime.

A farewell Class A First District title was presented to the longtime skipper during his final season as unranked Crittenden County upset No. 6 Russellville 22-21 at home Friday night.

It was the sixth Class A district title since Starnes took over the program in 1991. Crittenden last won the league crown in 2008 en route to a regional championship and sub-state appearance.

This one was special, no doubt.

Starnes was emotional after the game, as customary giving all the credit to his boys.

“I couldn’t be prouder of a group of kids than I am this group right here,” he said, choking back tears. “They played with so much heart. I haven’t seen a team fly around like that and gang tackle like they were.”

For a team lauded for its high-scoring passing attack – it had posted 178 points in the previous three games and broken a number of team and even state records for offense – it was the defense that held things in order down the stretch. Two fourth-quarter stands, one at their own six-yard line, made Crittenden’s 22 first-half points enough for the unlikely championship.

The boys dug deep into their emotional soul. Junior defensive end Sean O’Leary said there was a team meeting on Tuesday, unbeknownst to the head coach. It was a meeting meant to motivate the troops.

“We met in Coach (Sean) Thompson’s classroom early this week and had a big talk about wanting to get this district championship for coach Starnes, for his last year,” said O’Leary, who recovered a fumble and had a sack in the game. “We wanted this really bad for him.”

Junior running back Devon Nesbitt rushed for a game-high 132 yards as Crittenden played more of a ball-control, clock-management game than it had in previous outings. There were some big catches at key times in the passing attack, though. Junior quarterback Hunter Boone was 10-for-23 and had a couple of interceptions. His receivers covered 108 yards, none bigger than Cody Belt’s 30-yard reception late in the second quarter, taking the ball to the five-yard line and setting up the Rockets’ last touchdown. A conversion pass from Boone to his top receiver, Ethan Dossett, provided what turned out to be the game winner by the slightest of margins.

The victory ensures the Rockets of home field advantage throughout the first four rounds of the playoffs.

First, Crittenden closes out the regular season next week at Hopkins Central.

The Rockets will host Caverna the following Friday in the opening round of the playoffs.