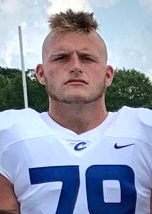 Crittenden County senior lineman Dylan Yates has been selected Preseason Player of the Year in the Class A First District by the Cats Pause magazine.

An All State Honorable Mention last season, Yates is being recruited by a number of smaller colleges and has received offers from Centre College in Danville and Mount St. Joseph in Cincinnati.

Yates, who plays defensive end and offensive tackle at CCHS, led Rocket linemen last season in tackles with 51. He was second on the squad in tackles for loss with 11 and led the Rockets in sacks with nine. He currently stands at fifth in Rocket history with 13 career sacks and is within striking distance of the school record, which is 18 held by Sean O’Leary.

He has twice been selected to the All West Kentucky Conference Team and was selected No. 4 in WPSD-TV's Grid Iron Glory Pre-Season Top 10.