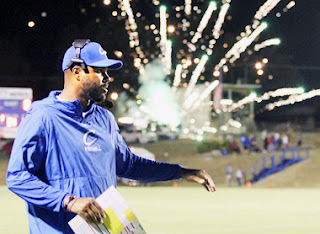 MARION, Ky. – The Rockets hooked up the mules and plowed some unchartered ground for what was previously heralded as a pass-oriented spread offense as Crittenden County blanked Trigg County 32-0 Friday.

Pounding the ball on the ground, the Rockets piled up 421 yards rushing led by junior Xander Tabor’s 201 and four other backs rushed for 40 or more yards.

It was the first time since the opening game of the 2008 season (vs. Lake County) that Crittenden gained that many yards on the turf. The school record for single-game rushing is 482 yards (vs Reidland, 1992), and had it not been for 10 penalties – mostly holds, some on big plays – the Rockets may well have watched that record fall.

The defense was just as dominant, however, if not more.

Crittenden recored its first regular-season shutout since 2017 with mighty defensive performance that included four points on two safeties, three interceptions, a sack or two and a fumble recovery.

The Rockets presided over the first half with a heavy hand while they took command of the game, holding Trigg to just one first down in the first two periods and negative 13 yards total offense. The assertive play continued in the second half as Trigg’s generally productive offense was held in its tracks, perhaps partly because the Wildcats’ quarterback Cameron Jordan (a Navy commit) left the game in the second period with what appeared to be a shoulder injury. The Wildcats managed to finish the contest with only 11 yards on the ground and 75 through the air.

The two safeties registered by the Rocket defense is most likely a single-game record. While historical accounts are not complete in that category throughout the team’s 62-year past, only once has a CCHS team done twice in a season, let alone one game.

“Trigg County is a really good team,” said Rocket coach Sean Thompson. “We made the game more about a physical mentality... who was going to be tougher tonight and our guys came out on top. They broke (Trigg's) will to play from the opening buzzer until the game was over.”

Thompson said talk of a shutout turned his stomach a week ago – speaking of his team’s 14-0 loss at Union County – but the tone was more festive this week.

“We felt a lot of pressure this week, people doubting what we’ve been doing, so we wanted to go out and show that we have pride about what we wear across our chest,” Thompson added.

The Rockets snapped a two-game skid that saw them fall out of the Class A Top 10 for the first time all season. Crittenden lost to Caldwell and Union back-to-back after winning three straight out of the chute. The losses tossed CCHS from a No. 5 ranking in the Associated Press poll to a tie for 13th.

“People start to question you when you lose to two good teams back-to-back like that, but then you come out and answer against a really good football team like Trigg County, I think it shows who you are.”

Crittenden will begin its Class A First District schedule next week when it hosts Caverna.