AT A GLANCE: Rockets gear up for Union 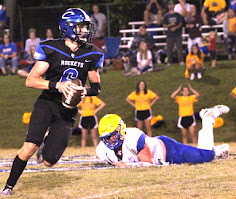 The 2004 matchup with Union County had the second highest combined amount of points in a single game, 101, in CC football history.

2021 District 1A, District 1 Review – Week 5
- Russellville (4-1) – RHS’s only loss has come against perennial powerhouse, Glasgow, 35-49.  Glasgow broke a streak of four consecutive ten win seasons last year when they finished 7-3.  RHS’s wins have not come against perennial powerhouse’s as those teams are 7-9 (excludes COVID forfeits) against even weaker opponents.  RHS should win the next two games and be 6-1 when they play their rival, Logan County.  Russellville was ranked #9 in Class A prior to their win last week.

- Fulton County (1-4) – Fulton County’s lone win came against hapless Ballard Memorial (0-5).  Ballard has only scored 26 points on the season.  Fulton County looks to be on its way to a 1-9 season along with a first round matchup on the road against the number two seed in the district.  FC has only 22 players on their team.

period) was in week 9, week 10, and round 1 of the 2016 playoffs when their opponent’s passing yards only accounted for 11.97% of their total yardage.

In the last three games, CC’s opponents have rushed the ball at least 47 times each game.  That is the first time that has ever happened.  Previous record was at least 44 attempts for three consecutive games.

CC had 13 first downs last week which tied for the most in a single game over the last 17 contests.

It has been 26 games since CC has surrendered a special teams touchdown.

Preston Morgeson rushed for 192 yards last week.  Prior to the game, Morgeson had 188 rushing yards for this career.  Those 192 rushing yards were also the 35th most ever in a single game.

Preston Morgeson’s 27 rushing attempts are tied for the 25th most in a single game.

Preston Morgeson made his tenth extra point in-a-row last week.  He is the 17th player to accomplish that as a Rocket.

Record Breaker Watch
Luke Crider has 2,623 career passing yards ranking him 5th in the category and next up are Jamie Curtis with 2,813, Nick Castiller with 2,814, and Austin Berry with 3,744.

With 70 more passing yards, Luke Crider will record the 22nd time a quarterback has passed for at least 750 yards in a season.

Luke Crider has 177 career passing completions ranking him 5h on the list.  Next up is Jamie Curtis with 182 and Austin Berry with 227.

Luke Crider is 6th in career passing attempts with 329.  Next up are JTurner Martin with 362 and Austin Berry  with 396.

Luke Crider is 3rd in career touchdown passes with 36.  Next up Austin Berry with 47 and the all-time leader Hunter Boone with 84.

Luke Crider is tied for 3rd in career passing touchdowns to interceptions ratio with a 1.57 ratio.  Austin Berry is the all-time leader with 2.61.

Luke Crider is the 12th player to record 2,500 yards of offense in a carerr.  Crider now has 2,539 yards.  Next up are Rodney Robertson with 2,835 and Sean Thompson with 2,987.  Yards of Offense include rushing and passing yards combined.

Luke Crider is 12th in TDs Responsible for in a Career with 37.  With 8 more TDs, Crider will be in 6th place in this category.

Preston Morgeson has 810 career receiving yards which is the 9th most all-time.  Next up are Preston Turley with 821, Dylan Hollis with 828, and Denis Hodge with 874.

Preston Morgeson will become only the 4th player to amass over 1,000 career yards receiving by the end of his junior year with 190 more yards receiving this season.  The other three are Ethan Dossett, T.K. Guess, and Chad Perryman.

Preston Morgeson is 5th in career receiving touchdowns with 13.  Next up is Chad Perryman with 15.

Preston Morgeson has 47 career receptions.  With 9 more receptions, Morgeson will be in sixth place.

Preston Morgeson is tied for 10th in career interceptions with 6.  Next up are Chad Perryman, Matt Mattingly, and Xander Tabor with 7.

Preston Morgeson has scored 20 career TDs and is tied for 19th in that category.  With six more TDs, Morgeson will be in 14th place.  Devon Nesbitt is the all-time leader with 61 TDs.

Preston Morgeson has 130 career points.  Morgeson became the 22nd player to score 130 points in a career.  There are five players within eight points of this current total.

Dylan Yates has become the 45th player to record at least 150 career tackles. He has 151 for his career.

Dylan Yates is tied for 6th in career tackles for loss with 30.  Next up are Dylan Clark with 35 and Aaron Berry with 43.

Dylan Yates is fifth in sacks in a career with 14.  Next up are Zack Beverly with 15, Lathen Easley & Adam Beavers with 17, and Sean O’Leary with 18.

Kaleb Nesbitt has an active streak of 10 consecutive games with at least one reception.  That is tied for the 9th longest streak in school history.

Kaleb Nesbitt has eight career TD receptions which is tied for 14th all-time.  He will be in sixth place with four more TD receptions.

Kaleb Nesbitt has 36 career receptions.  He is 25th on the list and seven players are within 5 receptions of his current total.

Case Gobin is tied for 27th in career sacks.  With two more, he will be in 20th place.

Case Gobin has five sacks on the season.  Gobin’s total is tied for the 17th most all-time.