AT A GLANCE: Open Week 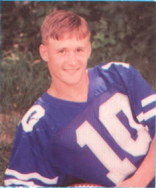 These four former Rocket QBs will soon be passed in the record book by Micah Newcom.