AT A GLANCE: Fulton County Pilots

Mike Sutton (#10) and David Beverly (#37) each set a school
record against Fulton County.

Find out what record they each hold and other records against
Fulton County in this week's post.
2022 Fulton County 1A (2-5, District 0-1)

* School is no longer in existence or playing football

As we approach playoff season, below is a quick overview of the KHSAA’s RPI system and playoff system.

In the first two rounds of the playoffs, teams will play corresponding districts, with District One vs. District Two, Three vs. Four, Five vs. Six and Seven vs. Eight. The first-place team will host the fourth-place team from the opposite district, and the second-place team will host the third-place team. The winners will meet in the second round.  Most likely the corresponding district (District 2) for Crittenden County will have seeding as #1 Bethlehem, #2 Holy Cross (Louisville), #3 Campbellsville, and #4 Fort Knox.

For the region championship (third round), the pairings will be based on the RPI of the remaining teams as determined at the end of the regular season in all classes with pairings as follows:

Note that points scored, margin of victory, etc. are not factors in the formula.

Record Breaker Watch and Other Notes 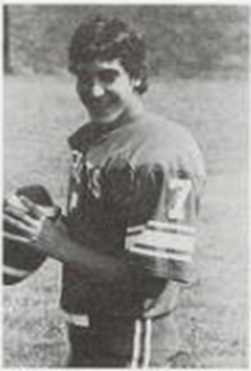 ABOVE: Al Simmons (#7) is about to be passed by Micah Newcom on the career completions list.  Simmons had the second highest total of completions in school history at the end of his senior season, 102.

Simmons was a 1983 All-WKC selection at quarterback and was the team's offensive MVP.  Simmons ended his career with the second most passing yards in school history at that time.