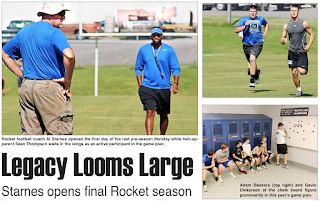 There are 42 players participating in drills and although things appear a bit more regimented than in the past, everything looks somewhat normal for July workouts.

Yet despite that exterior appearance, everyone who follows CCHS football knows this season will be nothing akin to business as usual. It will be monumental in many rights as longtime skipper Al Starnes makes his farewell tour of Friday nights.

Not a soul on his team was born when Starnes started coaching Rocket football in 1991. Indeed, these guys were not even a glimmer in anyone’s eye. Starnes has been the head coach at Crittenden County much, much longer than anyone else in history – more than four times longer to be exact. Beginning his 27th season at the helm, Starnes has won 167 games and lost 133. His teams have been largely successful, especially in the late 1990s and early 2000s.

Under Starnes, Crittenden County has won five district championships and a regional title.
As the record-setting skipper heads off into the sunset this fall, saying bon voyage to a team and school with which he has become synonymous – if not ambilically linked – may safely be considered something utterly out of the norm.

Keeping everything in check will be Starnes’ main focus, not letting emotions get too high or too low. Starnes knows he has a good squad returning, headed by starting quarterback Hunter Boone, a junior who is likely to reset all of the school’s passing records. But, the skipper knows its weaknesses, too.

Strength up front will be a big question mark. Adam Beavers, a senior lineman, and junior Gavin Dickerson will anchor the defense. They will be among the best in the district. In the backfield will be the district’s returning player of the year, junior Devon Nesbitt.

Last week’s workouts started with weightlifting, running and other agilities, chalk-talk sessions and group drills. On Friday and Saturday, there was an in-house offensive camp featuring the Tony Franklin System. The team had gone to the Franklin camp at Murray State the last two years and gained valuable information and experiences, Starnes said. But this year, it was conducted by the CCHS staff at Rocket Stadium.

Starnes said the staff was adequately trained to handle the camp on-site, and the team saved some money. Middle schoolers also attended the camp.

CCHS practice will continue each weekday morning through July then Rocket Camp Week begins July 31 and will continue through the first week of August. There will be 7-on-7 contests each Thursday at 6 p.m.

The team opens its season Aug. 18 at Stewart County, Tenn. There will be a scrimmage at home on Aug. 11 against Calloway County.