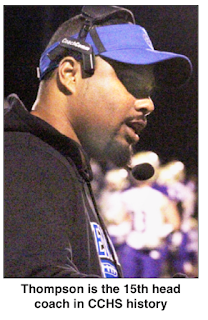 For the first time ever, Crittenden County will have one of its own guiding the football program.

It was no surprise to local football fans that Thompson was selected from two applicants for the job.
A 2004 graduate of Crittenden County High School, Thompson has been offensive coordinator, assistant head coach and the heir apparent to Al Starnes over the last few years.

Starnes retired from coaching this fall after 27 years as the head coach at CCHS. He made Thompson his head assistant last summer and made it no secret that he supported Thompson to become the next head coach.

Thompson played quarterback at Crittenden County then at Campbellsville University. He joined the Rocket football coaching staff in 2009 then spent a few years at Union County before returning to Crittenden as offensive coordinator in 2014.

Thompson says he is thankful for this new leadership role.

“My ultimate goal is to be the best leader and role model that I can for the youth of Crittenden County,” he said. “There’s so much more to football than the game itself. I will strive to set the best example I can for the players.”

Superintendent Vince Clark said the selection of Thompson as head skipper was an easy one.

“Coach Thompson is a Rocket, through and through,” he said. “Not only has he distinguished himself as one of the offensive gurus in western Kentucky, but also he has a strong commitment to carry on the principles and beliefs that Coach Al Starnes has spent 27 years establishing. Building relationships and teamwork are his hallmarks.”

A reception for the new head coach was originally scheduled for Tuesday, but weather postponed it to a yet-to-be-determiend date.
Posted by Rocketland News & Notes at 9:07 PM