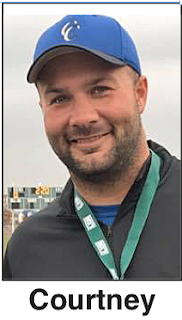 Thompson, hired earlier this school year to replace longtime head coach Al Starnes, has named a new middle school skipper and this week unveiled a new look for the team’s helmets in 2018.

A former teammate of Thompson’s is being called up from the Junior Pro Football program to take over the reigns at Crittenden County Middle School. Jacob Courtney, a 2007 Crittenden County High School graduate, will become the head coach at CCMS, taking over for Bryan Qualls, who had coached the previous two seasons at the middle school level. Qualls, who guided CCMS to a 4-4 mark last year, will move up to the high school staff as receivers and strong safety coach.

As a player at CCHS, Courtney was a defensive end and he is 34th on the all-time tackles list with 185 for his career and was a two-time All West Kentucky Conference selection.

Thompson said Courtney’s success and clear understanding of the game has made him a natural choice to become the next middle school skipper.

“The parents and kids all love him and he has a passion for Crittenden County football,” Thompson said.

Courtney, 29, recently became engaged and plans on getting married right before football season, then holding off on the honeymoon until after the season ends. 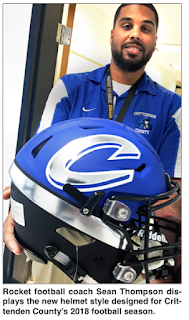 “Lot of things are going on right now,” he said. “I’m excited to be coaching the middle school.

The seventh graders are guys I started in little league with and I am looking forward to another two years with them.”

The football team will be sporting a new helmet design this year. The matte-finished blue and black Riddell Speed Flex helmet will be punctuated with a glossy C – in 3D chrome.
Offseason weightlifting is already underway for football players not currently engaged in other sports. The summer conditioning program for grades 9-12 will begin on May 30 with daily workouts starting at 9 a.m.

Thompson said the middle schoolers will start practice with the high school team just like last season on Monday, July 16.

“We brought them in with the high school guys and installed the offense all at one time. That worked very well so we’re doing it again,” Thompson said.

Posted by Rocketland News & Notes at 9:56 AM