Is this the best LB corps ever? 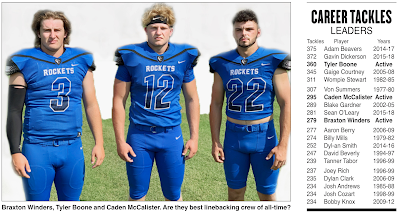 Generations come and go without laying eyes on unprecedented greatness. Right now, Rocket football fans very likely could be witnessing history. Here’s a case for why.

Discerning observers agree that the Rocket football defense is one of the best in the school’s 63-year football history. It is allowing just 75 rushing yards a game and is the No. 2 team defense in Kentucky’s Class A.

Central to those high marks are its linebackers.

Just about anyone you talk with around Crittenden County athletics recognizes the unparalleled abilities of the so-called three-headed monster that’s rewriting the defensive record books.

Do seniors Tyler Boone, Caden McCalister and Braxton Winders have what it takes to be called the best ever? As a group, there has never been a linebacking corps anywhere close, according to some longtime football experts.

Hall of Famer Coach Al Starnes was the skipper at CCHS for 27 years. His reign covered some of the best teams and greatest players in school history. He recalls other top-shelf backers like David Beverly, Josh Cozart, Joey Rich and a handful of others, but the longtime coach is emphatic that the outfit playing right now is the best, and he thinks Boone is the greatest linebacker he’s ever watched in a Rocket uniform.

“Rarely do you get a group of guys like this together at one time,” Starnes says. “You might have one, or maybe two, but nothing like this.”

Playing linebacker requires a varied skill set. It demands speed, agility, grit and desire, explains Starnes. It also takes an immeasurable asset they call “a nose for the ball” which certainly translates into a quantifiable metric.

“You’re suppose to be the toughest guy on the team. You’re put back there five yards where it’s designed for you to make plays sideline to sideline. You have to be physically strong enough to take on a lineman that comes out to block you and athletic enough to avoid some of that. Plus, you have to be tough enough to knock that lineman back into the ball sometimes. Like we always teach, when you get to the ball, you need to get there in a bad mood,” said the former coach.

Due to injuries, and this year the pandemic, Boone has never played a full season. Yet he’s among the most prolific tacklers of all time. He has 360 right now and the career leader is Adam Beavers with 375. It’s clearly possible that Boone will overtake that record in another game or two. He had 21 tackles in the last contest against Henderson County. Boone set the record for most tackles by a freshman with 99.

McCalister led the Rockets in tackles last season as a junior with 116 and has 295 in his career. Winders, who led the team in tackles as a sophomore with 100, has 279 career stops.

Wompie Stewart, who won a state championship in 1985 and was the top tackler that season with 154 – a single season school record – agrees that Boone may be the best ever. Stewart says it is difficult to compare players and groups of players from one era to another for a variety of reasons, schemes being one of them.

“We didn’t have to worry too much about the pass,” he said. “We were focused on stopping the run because that’s what everybody did back then.”

Stewart said his group, which included linebackers and ends Donnie Morgan Phillips, Jeff Porter and Darron Holliman, have to be mentioned when talking about all-time great defenses.

“It’s the best defense we've had in Crittenden County in 30 years and possibly the best group of linebackers we've ever had,” Stewart declares.

The trio’s defensive coordinator, Gaige Courtney, is quick to concur that it’s indeed a thorny issue, trying to compare and establish the greatest players ever.

“I haven’t seen them all, but they’re the best I’ve ever seen,” said Courtney, himself an incredible defensive player who helped his 2008 Rockets to the state semifinals.

Those who truly understand football’s intricate details and schemes – including those interviewed for this article – are quick to point out that Courtney is a big part of the team’s defensive success. He played four years at Kentucky State University and brings a great deal of expertise to the football staff.

Courtney’s job as coordinator of the defense is to break down the opposition’s game film and tailor a game plan to stop it. He’s pretty good at dissecting his own players’ strengths.

“Caden is our toughness. The others might be mad at me for saying that because they’re all tough, but you can look in his eyes during a game and see that he’s at a different level,” said Courtney.

Playing at 5-11, 185 pounds, McCalister is the smallest of the three which perhaps tempers his resolve to be the most physical, the coach explains.

“Braxton gets overlooked sometimes. He’s so consistent. I ask him to do so many things and he plays so unselfishly and his body just holds up,” Courtney said. “He blitzes all the time and has to take on blockers for the other guys so he might not make as many tackles as he could.”

Boone, says Courtney, is the heart and soul of the team.

“He’s the animal. His excitement and leadership is the heartbeat of our defense. He plays with so much energy. When he gets going, it’s hard not to follow him. And he’s like that every day, not just in games. Every time we step on the field for practice or Friday night, his energy and heart is just incredible.”

Posted by Rocketland News & Notes at 5:22 AM