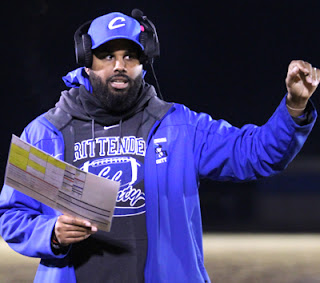 Rocket football Coach Sean Thompson met with his team today on campus and told players that he is resigning in order to accept another head coaching position.

It’s believed that Paducah Tilghman will later today name him its head football coach starting in the 2021 season.

Thompson, the first Crittenden County graduate to become head football coach at his alma mater, has guided his teams to three straight district championships and three berths in the state quarterfinals while posting a record of 28-8 in three seasons. His team was 7-3 last year, losing to eventual Class A state runner-up Kentucky Country Day in the playoffs.

A 2004 graduate of Crittenden County High School where he was a quarterback, Thompson played as a receiver in college at Campbellsville University.

The Tilghman coaching position has been open since January when Jonathan Smith resigned after posting a 22-11 record three seasons and taking the Blue Tornado to the state quarterfinals in 2019.