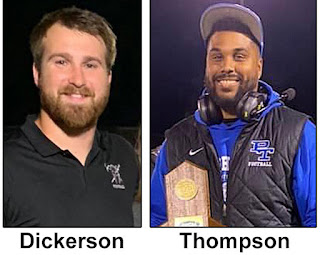 Next Saturday, a couple of former Rocket players and coaches will join only a handful of Crittenden County High School graduates to ever coach in a state football championship.

Sean Thompson, head coach at Paducah Tilghman, and Noah Dickerson, assistant coach at South Warren, will be on the sidelines at Kroger Field in Lexington on Dec. 4 as their teams seek state championships.

Thompson has guided the Blue Tornado to its first Class 3A state final since 2009. Thompson, who graduated from Crittenden County in 2004, was head coach at CCHS for three seasons, compiling a record of 28-8 with three district championships and three trips to the state Class A quarterfinals, before accepting the job at Tilghman after the 2020 season.

Thompson’s Blue Tornado was No. 15 in the KHSAA power ranking in 3A and was 5-6 after the regular season, which included a COVID cancellation loss to South Warren.

Tilghman started the year 1-4, but is on a four-game winning streak and will play Belfry (8-6) in the 3A title game. Thompson’s team beat the No. 1 RPI team Christian Academy of Louisville in the regional finals two Fridays ago and the No. 2 RPI team, Glasgow 39-20 this week. Both games were on the road.

Dickerson, who is a former CCHS graduate assistant coach and a 2015 Crittenden County High School graduate, is a physical education teacher and receivers coach at South Warren, where he has been the past two seasons. The Spartans beat Woodford County 46-25 Friday in the state semifinal round and will face Frederick Douglas in the Class 5A state championship in the second game at 3pm on Saturday at Kroger Field. Thompson’s team plays the first game Saturday at 11am.

There have only been a few CCHS grads to coach in football championship games. Jeff Riley, an assistant coach and current athletic director at Caldwell County, was on the coaching staff for the 2012 Tigers' 2A state championship; and local graduate Dusty Croft was an assistant at Franklin-Simpson in 1995 for a state final. Otherwise, as far as we know, the only others to coach in a state title game in Kentucky or elsewhere were the local grads serving on the 1985 Rockets staff, including Jack Easley, Greg Holloman and Jimmy Croft.

Posted by Rocketland News & Notes at 9:25 AM